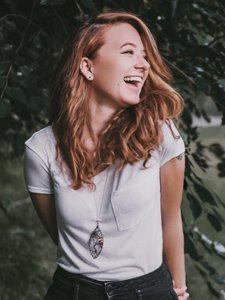 Emily Weaver is originally a Florida native, graduating from Navarre High School in Navarre, Florida, in 2013. Since joining the activity, she has been taught by educators such as Zerick Randolph, Luis Rivera, Jack Mizutani, and Danny Guttierez. She studied music education at Troy University in Troy, AL, from 2013-2015, marching with the Sound of South on snare drum. From 2015-2017, she studied music performance at the University of South Alabama and marched with the Jaguar Marching Band, again on snare.

Emily spent two seasons with STRYKE Percussion based out of Hollywood, Florida, performing as the visual soloist in their 2017 production “King”, and aged out in the front ensemble in 2018 performing “Nightmare at 30,000 feet”. Immediately after aging out, she moved to the metro-Atlanta area to teach full time and further pursue her career as a freelance artist and visual designer.